Last week we attended the annual meeting of the Society for Freshwater Science in Raleigh NC.  I have been a member of this society since I was in grad school (when it was still named NABS), and this meeting has been a special event for me for a long time.  I presented my first dissertation results at this meeting and had my first encouraging encounters with senior scientists who have since become important supporters, allies and colleagues. Now it is a fun chance to catch up scientifically and personally with past peers, collaborators and old friends who are spread across the country.  As (now past) president Emily Bernhardt described it in our opening session, SFS is truly the “Freshwater Family Reunion”.

This is the first SFS I have attended with a large group of graduate students, and the best part for me was watching them jump headlong into this meeting.  They gave amazing presentations and posters, and discovered what I did when I first attended – that SFS is a welcoming place for new scientists, and that the enthusiasm generated by a good talk can ripple out and lead to connections with other scientists and labs that you never anticipated.  They jumped right into the core of the workings of the meeting, volunteering to join the Student Resources Committee, to introduce a few members of the inaugural class of SFS Fellows, and dancing backup when present-elect Baxter and I sang karaoke for the live auction. They also had tons of fun, meeting new students, prowling downtown Raleigh, and stalking me to post “selfies with my mentor” to Twitter.  My proud mentor feathers were puffed out the entire meeting!  It meant alot to me to see them embrace and be embraced by my Freshwater Family, and I suspect at least a few of them will return to the meetings again and again.

Like many family gatherings, this meeting was also a venue to deal with tough issues that are facing our society.  There has been a lot of discussion this year about inclusivity as a result of North Carolina’s HB2 and the meeting location in Raleigh.  The meeting opening session including an amazing presentation on inclusivity by Alex Webster and a movie by Eric Moody that featured society members, which you can watch most of here.  I have rarely seen such a clear, compelling presentation on the value of diversity in any setting, and I know it reached many folks who have not previously thought deeply about these issues. Although a presentation cannot solve deep seeded issues related to diversity, inclusion, and marginalization, I sincerely hope that this meeting started a dialog that will continue in the coming years, particularly as the meeting moves next year to Detroit, where “navigating boundaries” will be a central organizing theme of the meeting. Out task now is to listen, follow through, and work to integrate inclusivity to strengthen and insure the future of our Freshwater Family (see this great blog post from Alex Bond on how to not miss the mark with these initiatives).

Which brings me to the future – at this meeting, Colden Baxter took over as President of the society, and I am serving with him as Vice President.  This meeting was a learning experience for me on the inner workings of the society, which I had already started to get up to speed on as Vice President-Elect the past year.  I left the meeting profoundly humbled by what SFS has meant for me, my lab and the wider collection of freshwater scientists, and by the responsibility that we now have as leaders of this family.  As Baxter said when he took over as president, when times get tough, as they are now for scientists politically and socially, we always go home to our family for strength and support.  I am excited for what this year will bring, and know that no matter what, there will be a Freshwater Family Reunion next year where we can celebrate our past, navigate our present, and chart a path forward into the future (Detroit May 20-24, mark your calendars now!). 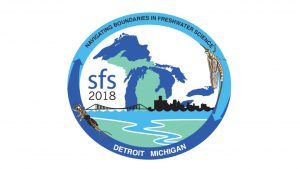