Reflections on a work retreat

I have spent the past 10 days or so in Laramie WY, hiding and working on metabolism modeling with my colleague.  It’s been a great break, and I feel like I’m going to look back on this time as a key stop on my academic journey – and here’s why: 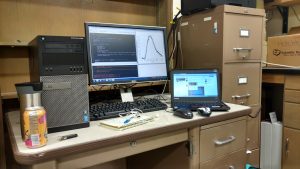 My typical environment for the past 10 days

First, it’s amazing how much you can accomplish when you remove yourself from the every-day grind.  I know this inherently make sense, but it’s so rare to have these opportunities that I lose sight of what’s possible.  I’ve spent several years lamenting that I don’t have the time to learn R, and then several months making slow progress while working through training and example code at home.  In the past 10 days I’ve learned more about data manipulation, model execution, and plotting then I would have learned in a whole semester trying to work on my own at home.  It’s liberating to be able to focus on a single thing, and it makes me wonder what I could accomplish with a year-long sabbatical away from home.

My rhats all equal 1! Never thought I'd be this excited about model fits, #sabbatical #adventuresinR pic.twitter.com/1IwKVh4YSF

My last “work retreat”, writing in the library at Tomakomai Experimental Forest, March 2009

I was also struck by how long it has been since I’ve felt this focused and also isolated from responsibilities.  I kept reflecting on my time spent at Tomakomai Experimental Forest in spring 2009 – maybe because I was primarily analyzing data collected during that project, but also because I think that was the last time I was truly “away” and focused on work.  I also kept reflecting on my time as a PhD student living in Lower Stanley, ID – particularly the last summer when I stayed past the core of the field crew to complete a large temperature-manipulation experiment.  Although it’s exciting to be immersed in work…it also gets lonely.  I’m so grateful for friends here in Laramie, who have welcomed me to their home for great dinners and football immersion – I would have gone into withdrawal since the place I’m renting doesn’t have cable.

The last thing I learned – the longer a work retreat goes on, the easier it gets to waste time.  The past few days I’ve fallen into a pattern of working hard on analysis during the day, then coming back to have dinner and wasting time on the internet until finally focusing on writing…and then writing quite late into the night.

#Sabbatical is awesome, but I miss my real standing desk. pic.twitter.com/GVVCcNhMQk

I know that’s a pattern I would never fall into at home, but I have seen it emerge other times I’ve been away.  I think I’m about at my limit of productive time spent away from my family – good thing they’re heading out to meet me today!